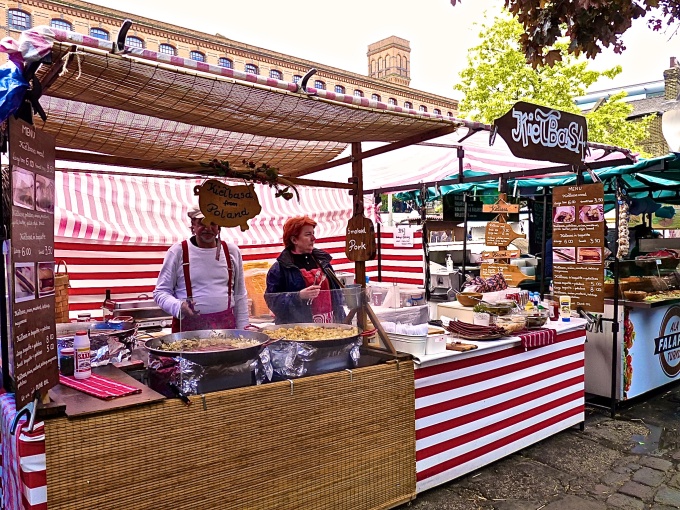 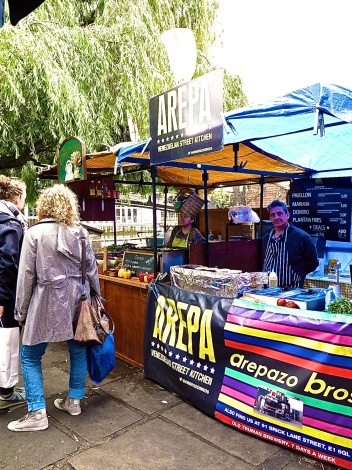 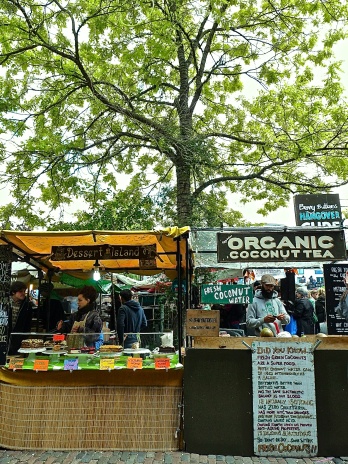 Camden Lock’s ‘Global Kitchen’ in London is a great place to go for dinner* or lunch. The market stalls have a plethora or fresh dishes cooked by various nationalities that go to make up London (observed by strict food health regulations). Choose your fare and eat at communal tables under the canopy or by the river. Open 7 days from 10am to 6pm. www.camdenlockmarket.com

*When is dinnertime in Britain?  This it depends on which Class you are from.

The upper-classes, including those at private boarding schools have dinner around 8pm and dress up (you’ve seen Downton Abbey?) The day’s feasting order is:  breakfast – morning coffee – lunch – afternoon tea (or tiffin for those returned from the Continent) – dinner.

But for the working classes: including state school children, dinnertime falls somewhere between 12 noon and 2pm. These hours were settled during the Industrial Revolution in the Victorian era. Factory workers would go home for an hour’s dinnertime when the bell rang and be re-fuelled on a big meal for manual labour, served up by a mother or daughter who remained at home slaving over a hot stove. Order: Breakfast – tea break (at work) – dinner – tea (high tea which includes food) – (+ supper for those in heavy manual trades). There were usually stalls selling beer at the end of a shift at the factory gates.

Theatre performers and crew traditionally have their dinnertime in the middle of the day also, so that they fully charged for rushing about the stage in the evening.

For the last few decades however, industries and schools have tried to standardise the hour’s break as ‘lunchtime’. However this is still confusing when for many children of working parents, this may still be their main meal of the day.

This post is part of the WordPress Photo Challenge: Dinnertime. To see others or take part yourself visit: https://dailypost.wordpress.com/photo-challenges/dinnertime