After reporting a plaque missing from a one-time Ford (Hendy) building that was requisitioned as a factory for Spitfire parts during WW2 (currently the Voodoo Lounge and Buyology) in Vincent’s Walk, I have been on a mission taking photos of all the plaques I see in Southampton, in case they are stolen by metal thieves. There are a number blue plaques on homes from Emily Davies (feminist activist) to R.J Mitchell (aeronautical engineer designer – famous for the Spitfire).

I had a call yesterday from a gentleman to tell me that my ‘blue badge’ was ready for collection. (A blue badge is a special disc to put in the car, so that a disabled person with mobility problems can get parked closer to the shops or on limited, designated places in busy areas).

But my chemo-brain could not link this thought thread, and in my head my blue plaque was ready. I told the man kindly that although I had made enquiries because it was missing, I had not actually ordered it myself. He assured me that someone else could collect it on my behalf if they filled out a form. I checked that it was for the Spitfire factory, but he assured me that it had my name on it!  Fame at last? All sorts went through my head until the council worker reinforced the words “blue badge” at least nine times before I realised my disabled parking disc was ready.

He had no sense of humour, when I apologised and pointed out that I suffered with cognitive disorder.

One could be forgiven if you live outside of Britain for thinking that the WWII  Blitz (bombing of Britain during the second World War) only happened in London. Yes. They did suffer terribly as it had a big population, but bombings happened in cities all over Britain. Photos are few or non-existent of most places that were bombed outside of the capitol as not many owned cameras and most photo-journalists worked in London.

Coventry, an important centre since medieval times was flattened. Every port city was blitzed; Hull, Liverpool, Bristol, Swansea, Plymouth to name a mere handful. The South Coast in particular was a dangerous place to be and was where most of our sea defences were.

Southampton was bombed frequently, firstly because it was an important commercial port and secondly being the home of Supermarine that had two factories here, building Spitfire aircraft. When these were both bombed, killing 100 factory workers, mainly experienced engineers, Spitfire production was spread out all over the South. Garages, laundry rooms, hotels and anywhere that still had a roof was commandeered into the design, manufacture, or storing of Spitfire parts. https://en.wikipedia.org/wiki/Supermarine_Spitfire 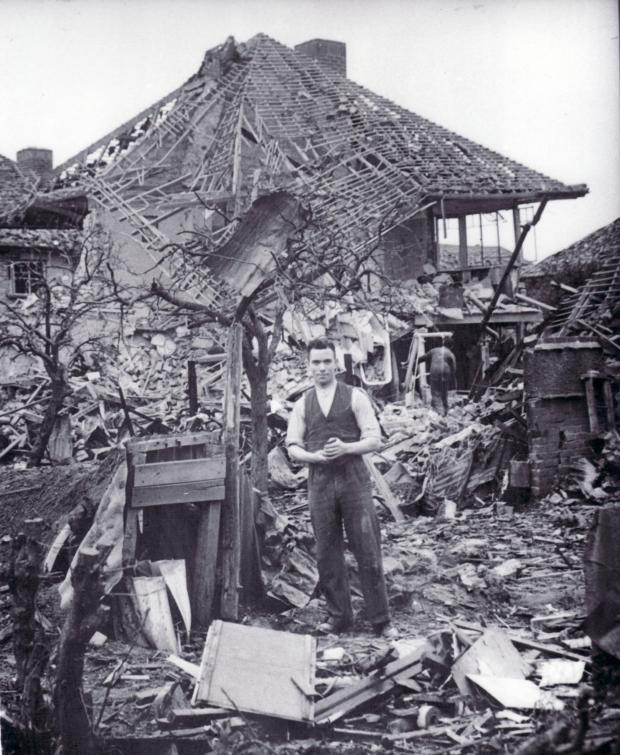 Southampton was grateful for so many ancient vaults to act as air-raid shelters, which saved the lives of many of its citizens and allies staying here.  http://www.sotonight.net/southampton-local-info-history/southampton-medieval-vaults/

Guided tours of these amazing undercrofts can be booked and each autumn there is a “Music in the City” festival where by unusual places like these are opened up for a variety of bands to perform in.

After the war rationing continued but children found enormous pleasure from playing on bombed sites until the sixties. As a child I found gas masks, bits of junk; there were endless windows to throw stones at and hideouts were dugout from mounds of rubble. Unexploded bombs have been discovered frequently in Southampton since the war and have had to be deployed. The most recent  was discovered by a group of builders in a main street in 2010. http://news.bbc.co.uk/1/hi/england/hampshire/8549256.stm

In retrospect these ‘playgrounds’ were extremely dangerous, but nothing compared to the dangers faced during the war.

Britain faced a tremendous rebuilding cost as temporary prefabricated homes were developed. Many houses were built in the 1950s, but as the population started to boom again, concrete became the main building material for quick, cheap imitations of Le Corbusier’s modernist architecture.

We looked towards the new…  (a future blog).